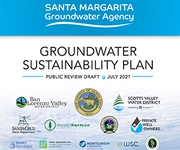 Under the Sustainable Groundwater Management Act, one of the key responsibilities of the Santa Margarita Groundwater Agency (SGMWA) is to develop, adopt, and submit a Groundwater Sustainability Plan (GSP) for the Santa Margarita Groundwater Basin (Basin). The Basin forms a roughly triangular area between Felton, Ben Lomond and Scotts Valley. This Basin provides drinking water for the Scotts Valley and San Lorenzo Valley Water Districts, over a dozen small water systems and around 1,100 parcels served by private wells. Additionally, the groundwater table influences the surface water in the San Lorenzo River, a primary drinking water source for the city of Santa Cruz and home to endangered species.

The Basin’s GSP is due to the California Department of Water Resources by January 31, 2022.

The 60-day public comment period for the Groundwater Sustainability Plan (GSP) closed on Thursday, September 23. Staff and consultants are in the process of considering the comments and will bring the final GSP draft document to the Board at their scheduled for Wednesday, November 17.